These movies are capture while our rotating sphere was rotating.

Summary of the context and overall objectives of the project RotaNut

What is the problem/issue being addressed?

The relationship between the celestial frame and the terrestrial frames is complicated by the fact that the rotation and orientation of the Earth is subject to irregularities. The research proposed will result in the development of improved model of Earth rotation and orientation with an unprecedented accuracy – at the sub-centimetre level. The rotation changes are known as variations of the length of the day, which are at the level of a few tenths of millisecond (ms) per day.

The Earth orientation changes are caused by the gravitational pull of the Sun and the Moon, as well as by many other factors that are progressively being identified by geodesists and geophysicists (in particular the existence of a liquid core inside the Earth plays an important role). Because the Earth’s shape can approximately be described as an ellipsoid flattened at its poles, the combined forces acting upon the Earth produce changes in both the speed of rotation and the orientation of the axis of spin (see Figure on the right). The term ‘precession’ describes the long-term trend of this latter motion, while ‘nutation’ is the name given to shorter-term periodic variations, which are the prime focus of the present project. The precession of the Earth in space corresponds to about 50 arcseconds (1 arcsecond =1”=1°/3600) per year and the nutation amplitude is at the level of a few tens of arcseconds. The rotation axis of the Earth is moving in space at the level of 1.5km/year due to precession and has periodic variations at the level of 600 meters (as seen from space in a plane tangent to the pole). The present observations allow scientists to measure these at the centimetre level.

Earth rotation changes, precession and nutation are measured using Very Long Baseline Interferometry (VLBI), a technique that employs huge radio-telescopes to observe extra-galactic radio sources such as quasars and providing the realisation of the celestial reference frame. There are presently significant differences at a few centimetres level between the VLBI observations and the results obtained from applying a theoretical model adopted by the International Astronomical Union (IAU) in 2000 and by the International Union of Geodesy and Geophysics (IUGG) in 2003. 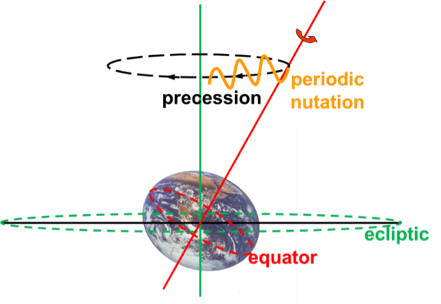 The adopted model is based on the idea that Earth reacts as a deformable object with a deformable inner core (viscoelastic central part of the Earth composed of a solid iron alloy), a liquid core (also composed of iron alloy), a deformable viscoelastic mantle (composed mainly of olivine and perovskite) (see Figure on the right), as well as oceans and an atmosphere. The adopted theoretical model is not perfect as seen from the observed residuals. Though they were obtained from a precise computation of the forcing (gravitational torques exerted by other solar system bodies on the Earth), on the one hand, and of the response of the deformable Earth to this forcing, on the other hand. In practice, the final model was obtained from a convolution between a precise rigid-Earth forcing theory and a transfer function accounting for some physical properties of the Earth interior, considering small contributions from its atmosphere. However, the Earth is a more complex object than that, and in particular, the atmospheric and oceanic contribution to Earth orientation are not perfectly modelled, and the coupling mechanisms at the boundaries between the inner core, the liquid outer core, and the mantle are not yet understood enough to be properly modelled. The aim of our project RotaNut is to improve the Earth rotation modelling and to get further insight into the Earth’s interior. The study requires a multidisciplinary approach mixing fields in astronomy, geophysics, geodesy, and fluid dynamics. The research proposed shall make important strides in understanding and modelling the physical processes inside the Earth (and inside the liquid core in particular) associated with Earth rotation and nutation. The existence of a liquid core inside the Earth and all the coupling mechanisms at the core-mantle boundary play indeed an important role in nutation amplitudes. An everyday example of the influence of the physical state of the interior on the rotation is that raw (liquid) and cooked (solid) eggs rotate differently. For the Earth, the identified mechanisms considered in the previous nutation model involve the flattening of the core and the fluid pressure and gravitational effect on that flattened boundary as well as a simple dipole and uniform magnetic field effect, because of their role in transferring angular momentum from the core to the mantle. By now, we have understood that there are important contributions from other components of the magnetic field, and that the dynamics in the liquid core and the presence of a topography at the core-mantle boundary at the kilometre level play an important role as well.

Why is it important for society?

The rotation of the Earth has long been used as a measure of time, and the stars as reference points to determine travellers’ whereabouts on the globe. Today, inexpensive global positioning systems (GPS) receive data sent by orbiting satellites and therewith can pinpoint the location of a person or a vehicle to within just a few metres and can provide the time from the GPS clock at below the tenth of millisecond. Precise timescales are provided using atomic clocks and precise positioning is determined using geodetic techniques such as GPS grounded on two reference frames: the terrestrial frame, fixed relative to the Earth and rotating synchronously with the planet, and the celestial frame, which is immobile in space, where the artificial satellites such as those of GPS are moving. For both public GPS and precise scientific positioning or timing one definitely needs to know precisely the link between the celestial frame and the terrestrial frame, i.e. the Earth orientation in space and its precise rotation speed.